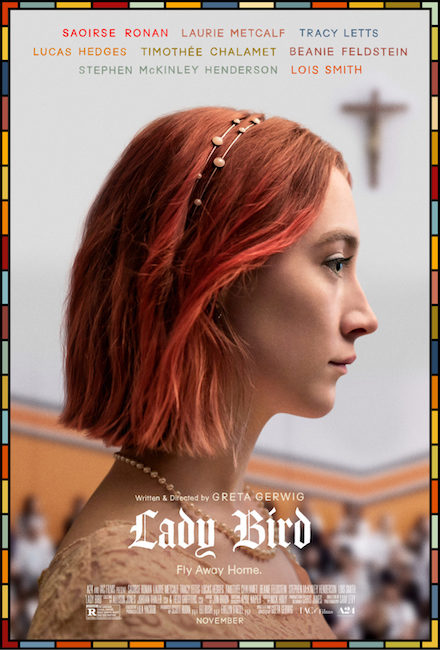 Warning – This article contains spoilers for anyone who has not seen the movie Lady Bird.

A critical success, this film about a mother and daughter relationship falls into the ‘coming of age’ genre, however it is also so much more than this in considering the systemic and unconscious processes at work that make this film both poignant and painful to watch.

There are many key themes present relating to those clients bring to psychotherapy, however I would like to pick out a couple that stood out for me which are perhaps better posed as questions we can imagine that Lady Bird (Christine), the protagonist, is grappling with unconsciously:

What is my desire?

How do I leave my family?

These two questions are in reality interconnected, as it is through desire that we leave the family.  However, in a family where the roles are blurred, and for a young woman whose desire has always had to be curtailed to cope with her mother’s envy, the two questions are complex and the unconscious conflict immense.

From the opening scenes, we see a mother who struggles to see her daughter as separate to her.  She clearly loves her, but also invests her own unfulfilled desires in her daughter.  This is suffocating for Lady Bird, to the extent that in an early scene, she flings herself from the car to escape the literal confines of being with her mother: existence is impossible with her mother and hurling herself from a moving vehicle is less a thought-out action of leaving, than a murderous gesture – self destructive to her and to her mother.

As the film unfolds, the usual twists and turns of teenage experience are interspaced and amplified by the complexities of Lady Bird’s family.  Her father is impotent – he loses his job and cannot separate mother and daughter.  However, what he does know is that Lady Bird must leave, and he facilitates this through making financial arrangements for her university education, without involving his wife to whom he seems to be unable to stand up against (or to come alongside).  This arrangement is pragmatically what Lady Bird needs, however, psychically it further undermines her autonomy and blurs any clarity of who she is in the family and who she is in relation to her mother.

Lady Bird understands, like so many of us who have had envious mothers, that she needs to ‘split off’ (disavow) her desire and get it met secretly, if at all.  Or she can turn it into something destructive.  Both choices aim to protect her relationship with her mother.

She gets in with the exciting, but bad crowd and swaps her boyfriend (who it turns out is gay) for an aloof boy who, like his friends, is nihilistic in his outlook on life.  Neither her gay boyfriend nor her disinterested one will help her leave her family, as neither contain her true desire.  Here Lady Bird seems to be asking herself less about her own desire and more about that of others: who am I for others and what do they want from me?  A question she asks herself repeatedly in the relationship to her mother.

There are two scenes in the film which fill us with hope for Lady Bird: the first when she owns her wish to go to the school prom and be with her old friends, thereby stepping away from her less nihilistic friends who are ‘too cool’ for school, but who in reality actually have no idea about what they want, other than to rebel.

The second scene of hope is at the end of the film where Lady Bird is at an unnamed university in New York.  Lady Bird’s father has slipped a pile of discarded attempts at a letter her mother tried to write to her into her suitcase which she finds.  This is significant as Lady Bird’s father is finally able to help mother and daughter separate: he encourages his daughter to leave but provides her with the evidence her mother loves her; he assumes his rightful position as his wife’s husband by consoling her at the airport when she, as a result of her struggle to let her daughter have her own desire and individuate, misses her daughter’s departure.

To Individuate or Rebel?

Towards the finale, there is a perfectly ordinary scene with Lady Bird, at what me must assume is her first party in New York, she drinks, meets a guy and they end up at his or hers.  She then becomes ill and the next scene is at a hospital where we learn she has drunk far too much.  This scene is a reminder of the powerful unconscious forces at play in Lady Bird – whether she can find a way to individuate and own her desire or create distance from her internalised mother through self-destructive acts (think back to the hurling herself from the car).

Ultimately the viewer is left with hope as she seems to have enough psychic distance to claim her birth name – Christine – and to find ways to be like her parents (visiting a local church), without having to be defined by being them, or not being them.

Christine  makes a call home to speak to her mother but she gets the answerphone.  The message here?  That her mother and family can survive her going and that they can too move on with their lives.  She is free.

Sam Jahara is a UKCP registered psychotherapist, certified transactional analyst and clinical supervisor. She works with clients and supervisees in Hove and Lewes.