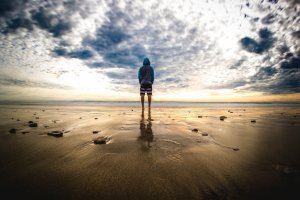 Grief is often referred to in the context of intense feelings experienced with the loss of a loved one. The loss we experience is often caused through death. Grief is, therefore, synonymous with bereavement.

This, however, is nowhere near the whole story. In order to know how to grieve, we need to understand grief.

When we are told that someone is grieving, we may assume they are feeling intensely sad. Although this is often true, grief is comprised of a multitude of emotions, and sadness is only one. One of the early pioneers of grief work (yes, there is such a thing), was Elizabeth Kübler-Ross. She suggested grieving was an active process that required a “working through of emotions” broken down into five core groups: denial, anger, bargaining, depression and acceptance. Sadness would fall into the ‘depression’ group in this model.

Since Kübler-Ross, plenty of other models have been proposed. All of these have added something to the field. I will not directly elaborate on these in this blog, but further information can be found on the Internet.

Grief is, therefore, an umbrella term for a whole host of emotions, and it is a verb.  It is something that we must allow ourselves to experience and actively engage with.

Why should I grieve?

Emotions exist within us, whether we consciously acknowledge them or not.  Where we are unable to feel them (through repression, which is always unconscious) these emotions will often express themselves as a conversion reaction. They will be expressed through the body such as in aches and pains. They may be expressed through even more obscure symptoms, such as a loss of physical movement.

Where we are aware that we are feeling grief, but actively suppress the feeling, emotions are likely to manifest as anxiety or depressive symptoms, which can persist for years.

Thus, there is no escaping it, grief must be felt and ridden out, like a storm. To complicate things further, it is not a linear process. We might have felt anger (perhaps with our loved one for leaving us) and moved onto bargaining (“If only I had done more for them…”) However, this does not mean that we will not return to anger again. And again…

We must grieve because we need to acknowledge what we feel.  If we do not (because we can’t or won’t) things get complicated.

How do I grieve?

Grieving (in the context of bereavement) used to be a socially prescribed activity which was both acknowledged by the wider community and defined as a process. Those who were bereaved would often wear symbols of their grief – black clothes or a black armband. Within their community, it was acknowledged that they would be grieving for a set period of time, often a year. This practice has largely been lost in northern Europe. However, in southern Europe, it remains common in more traditional communities to see widows wearing black for the remainder of their lives.

Love it or hate it, the one thing religion gave (or gives) us is a powerful story of what happens after we die.  From the Vikings with Valhalla to the Christians and Heaven, the concept of an afterlife can bring great solace to loved ones who are left behind.  The loss of socially prescribed ways of mourning, combined with a loss of religious beliefs, has made grieving more difficult.

A universal task in coming to terms with grief is to find some sense of meaning within it, and to weave this together into a narrative. We are no longer provided with cultural narratives in the way that we once were. This then becomes something that we need to do ourselves.

Why is grief hard for some people?

When I embarked on my own professional psychotherapy career, working directly with dying patients and their relatives, I imagined that the loss of the deceased would be felt most acutely where relationships had been close, connected and happy. However, the inverse was true. Where relationships had been difficult, strained, or even devoid of contact for long periods of time, the bereaved would often struggle to process the loss far more. This occurred particularly where the relationship was between a parent and their (adult) child.

The reason for this lies in attachment and in how we learn, through attachment, to feel.  For those of us lucky enough to grow up in homes where there is no abuse or neglect, and no unexpected losses, we find it relatively easy to move in and out of relationship – to say ‘hello’ and ‘goodbye’. With the security of the relationship comes an ability to feel emotions and make sense of what is being felt. Thus, the process of grieving, whilst hard, is something that can be actively undertaken.

In some parent/child relationships, the child has been significantly disappointed by the parent in the past. Parental neglect and/or abuse can lead to an accumulation of unacknowledged earlier losses in the relationship. In these cases, the final physical loss of the parent can make it very hard to come to terms with the enormity of all the losses that person represents. The loss is not only of the relationship and person, but also of hope. If the relationship between parent and child was strained or difficult, it is likely the bereaved will be poor at navigating his or her emotional states. This makes grieving terrifying, at best, or unthinkable, at worst.

As a clinician, I get a lot of fulfilment in helping clients to grieve. It is different from any other presenting issue they bring to me. Grief is the universal leveller. We will all experience it at some point in our lives. The way out and through grief is always the same – we have to feel the full range of emotions that our grief brings up.

Grief is not a mental health condition, and yet many people become stuck with their grief. When this happens, the secondary symptoms can mutate into more complex conditions such as anxiety, clinical depression and panic attacks.

Mark Vahrmeyer is a UKCP-registered psychotherapist working in private practice in Hove and Lewes, East Sussex. He is trained in relational psychotherapy and uses an integrative approach of psychodynamic, attachment and body psychotherapy to facilitate change with clients.