Nietzsche reflected on and wrote much about the lived experience of human beings. He discussed many things that were seemingly in conflict with the last thing he wrote. I have sometimes heard this used as a reason not to read Nietzsche. This apparent paradoxical nature might sometimes leave you confused and resistant to look again.  However, I feel he is always worth returning to, especially if we are curious about life.

According to Kaufman (2004) Nietzsche depicted himself in Ecce Homo as “a psychologist without equal and many consider his philosophical work to have a deeply psychological understanding of the human experience.”  [1]

Freud apparently discussed the level of introspection Nietzsche reached as being greater than anyone else past or potentially in the future. [2]

When I began to read Nietzsche, I was actually surprised at how engaged I became, despite how little I seemed to understand. He inspired me then and continues to each time I return to his texts, often seeing it from a different perspective each time.  I feel his rhythmical and metaphorical offerings were made to stimulate exploration and awaken emotional responses rather than offer conclusive truths. He was purposely ambiguous and contradictory. For me, Nietzsche was on the side of experiencing and embracing the significance of creativity, music and dance. He
welcomed understandings about fluidity, multiplicity, becomings and going beyond. I feel he invited us to see that we are so much more than we have dreamed of thus far, and there are many dimensions to be explored.

My understanding of Nietzsche is that he was not one to be dogmatic, and he challenged scientific reductionism. Bazzano (2019) discusses how Nietzsche did not see science as able to explain life, only describe it. He challenged people to see how structures and systems were filled with our attempts to the bring natural dynamic and conflicting forces (both internal and external) into order and control [3] .

Or sometimes, perhaps, as a way to avoid taking responsibility.  In fact, Nietzsche was often suspicious of the systematisation of life, “I mistrust all systematizers and I avoid them. The will to a system is a lack of integrity.” [4]   (Part 2, sec 26)

Nietzsche welcomed the dance of life. His writings pointed to the multiple dynamic perspectives and interpretations that direct human experience, and the oscillating movements between chaos and structure that we all seemingly exist within on a macro and micro level. He championed understandings and explorations that focused on active over reactive forces. He centred the ‘need to know’ that can monopolise human thought and perhaps gave consciousness and intellectual knowledge its origins and apparent semblance of supremacy as, in fact, secondary
to the primacy of the body. The latter being a direct experience of active forces experienced through feeling the body’s affects. [5]

Nietzsche has both inspired and disturbed me. He manages to shake the ground beneath you, leaving you adrift at times. Equally he evokes a desire to live this opportunity to exist and experience more fully, within all facets presented. I feel he provokes a desire to feel, listen and move. To take responsibility for this existence we are living in all its uncertainty, intensity and affect and utilise creatively their influence in our transformations. [6]

Sadly, his thinking can be overlooked and dismissed due to his fall into apparent madness. I feel that is a fruitful encounter missed. He is worth reading if only to find out if any gems touch and inspire something within you.

Susanna Petitpierre, BACP Registered, is an experienced psychotherapeutic counsellor, providing long and short term counselling. Her approach is primarily grounded in existential therapy and she works with individuals.  Susanna is available at our Brighton and Hove Practice.

A consideration of some vital notions connected to Existential Therapies

Being embodied in Therapy: Feeling and listening to your body 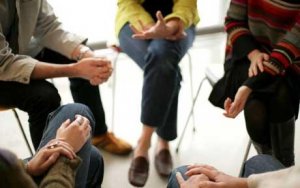 Brighton and Hove Psychotherapy runs a small weekly therapy group suitable to those who wish to explore and work on issues such as: relationship difficulties, loneliness and isolation, identity and belonging and interpersonal communication, amongst many others.

Being part of an ongoing supportive group, where issues are honestly discussed with the support of a therapist, can lead to profound positive change in how we relate to ourselves and others in our lives.  We all grow up in family groups and become part of a variety of organisations and groups throughout our lives. Many of us struggle to belong or to know how to interact in order to meet our relational needs. Group therapy is a reflective space where you will meet like-minded individuals who are willing to support one another towards personal development and growth.

We are currently taking on new members. To find out more please get in touch.